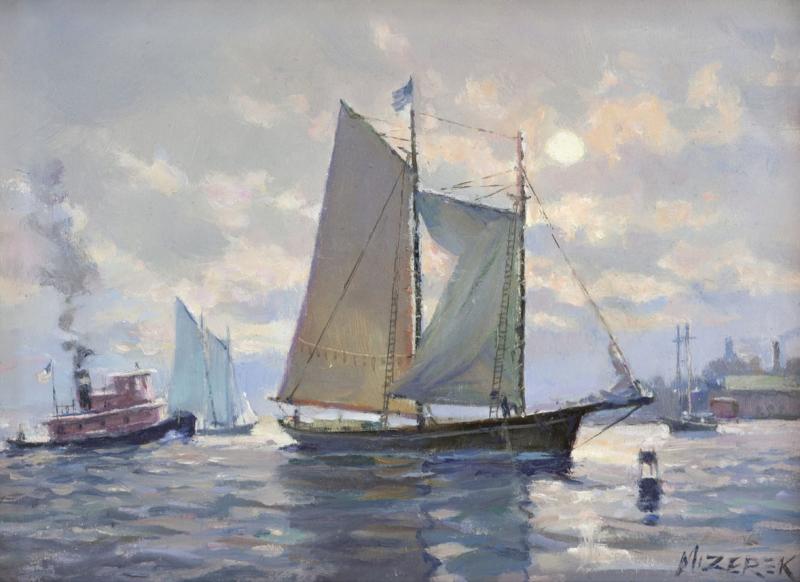 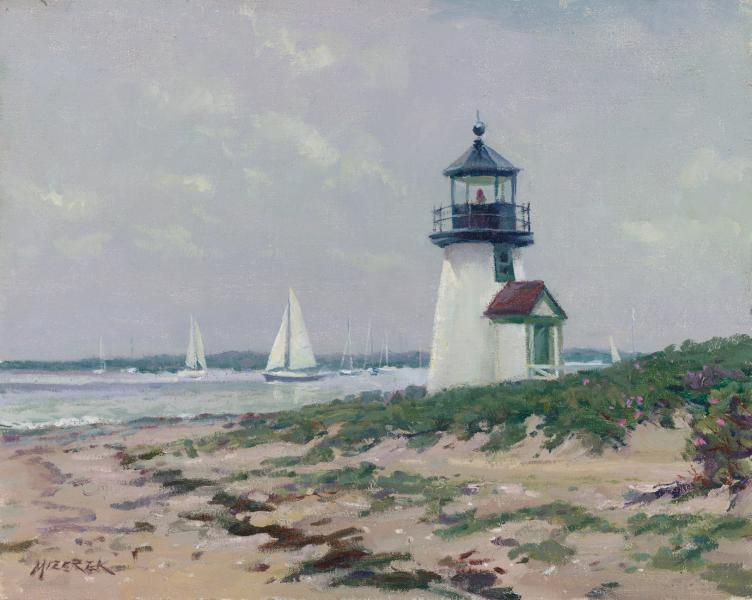 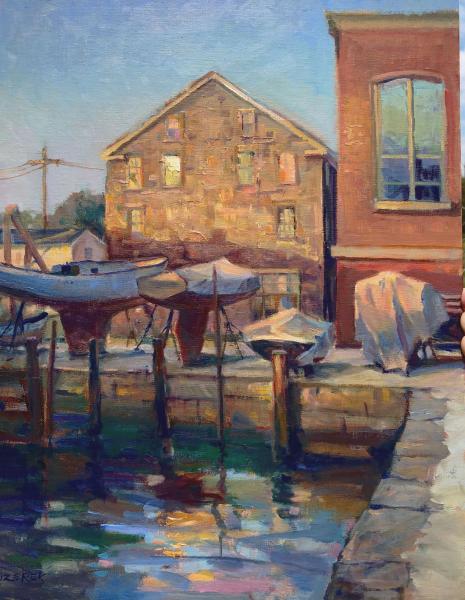 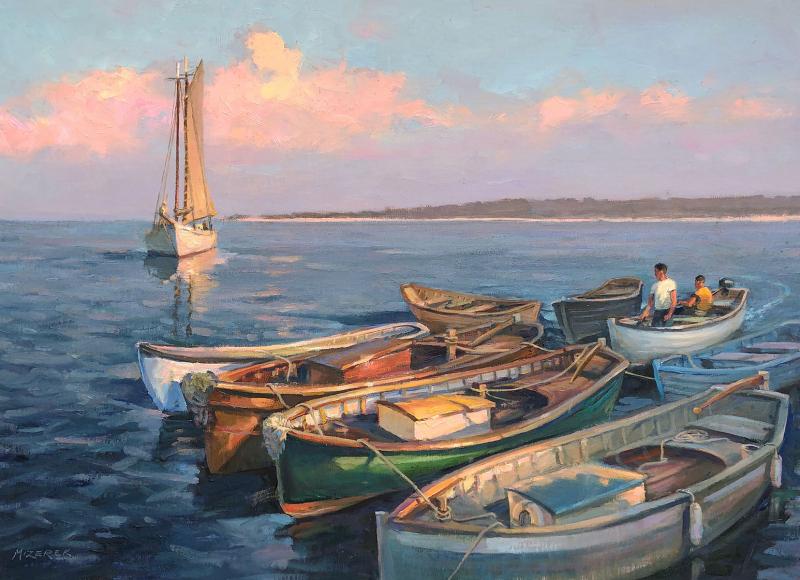 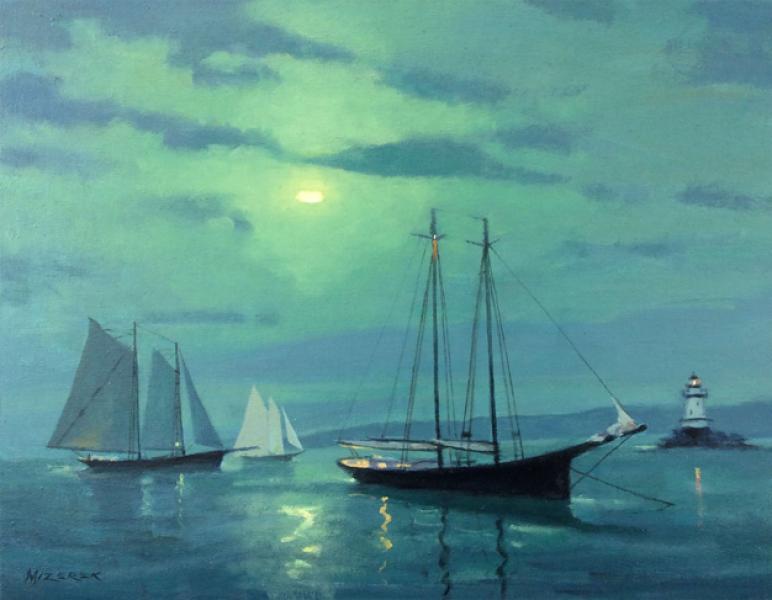 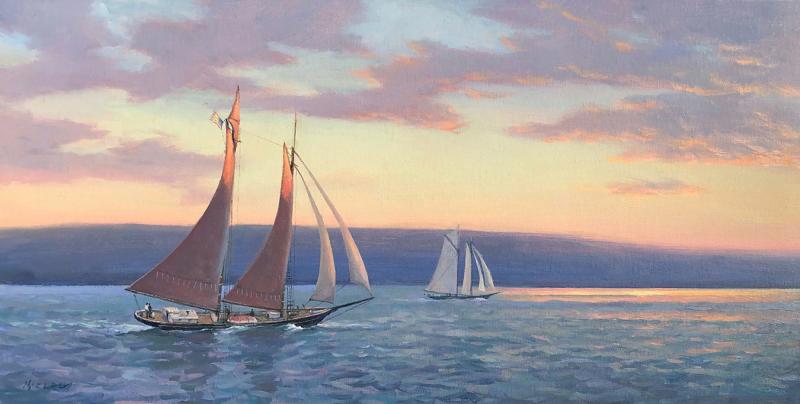 LEONARD MIZEREK Fellow, ASMA, nurtured his artistic love of nature while growing up and painting in the Brandywine Valley and countryside of nearby Pennsylvania. His early influence was with the Pennsylvania Impressionists and Brandywine  School.

He participated in several invitational Plein Air events including  Mystic, Cape Ann, Annapolis, and 11 years in Easton Md. He was featured painting live on TV France3 during a major antique boat festival

His painting was recently purchased by the Minnesota Marine Art Museum. In 2006, 2011 and 2016 he was awarded Artist in Residence at the Museum Yvonne Jean-Haffen in Dinan, France and three of his paintings were made part of the museum collection. He was one of 15 artists selected to paint at the Forbes Colorado Ranch and exhibited at the Forbes Museum in New York and made part of the permanent collection.He exhibited with 23 nationally recognized marine artists at, the Newport Art Museum, Maine Maritime Museum and Connecticut River Museum.He was featured on the cover of American Artist Magazine. He was featured in recent 2020 issues of magazines: American Art Collector Magazine June and July,American Art Review Feb, Fine Art Connoisseur Magazine, Fine Art Today,and Sea HistorySpring,Fall and Spring2021

Known for his colorful, luminous seascapes and expressive brushwork, Leonard paints on site deriving inspiration from the many nearby coastal locations as well as harbors throughout the world. A central theme throughout Leonard’s work is his use of light. In Mizerek’s words, “ Light alters the color of all objects and touches those nearby. It sets a mood and evokes emotion, which I strive to portray in my work. I often explore various methods to interpret the way I view nature. I prefer marine subjects because I enjoy the way water reflects the floating objects, as well as the sky and time of day. It mirrors shapes and intensifies light. I paint outdoors to capture the light first hand and bring out all its color and luminosity.”

Leonard was awarded the Salzman Award for Excellence in Painting in the 112th Annual Exhibiting Artist Members’ Exhibition of the National Arts Club in New York City. He received the Iron Man Award from the American Society of Marine Artists for distinguished achievement and a Merit Award at the Coos Art Museum in the state of Washington. In 2020 he won  2nd Place Plein Air in OPA Wet Paint Competition  and Salmagundis 2020 Open Exhibition Seascape award.

Past exhibitions have included: Over 50 Featured Artist and Solo Shows. The American Society of Marine Artists Exhibitions at the Cape Museum of Fine Arts, Chase Riverfront Arts Center, Wilmington, DE, the Delaware Art Museum, The Frye Museum of Art, Seattle, WA, The Mariner’s Museum, Norfolk, VA, The Cummer Museum, Jacksonville, FL, San Diego Maritime Museum, The Mystic Seaport Museum. He has exhibited in the Annual Mystic International and Modern Marine Masters Exhibitions since 1988 and two exhibitions at the National Academy of Design in New York. He graduated with a BFA from Virginia Commonwealth University and studied at The New York Art Students League with Max Ginsburg and Nelson Shanks and at the National Academy of Design with Raymond Kinstler. Leonard is an Officer and one of 27 Fellows of the American Society of Marine Artists and one of 70 elected members of the prestigious Guild of Boston Artists. He is a member of the New England Plein Air Painters, Signature Artist Member of the New England Watercolor Society, and the International Society of Marine Painters.